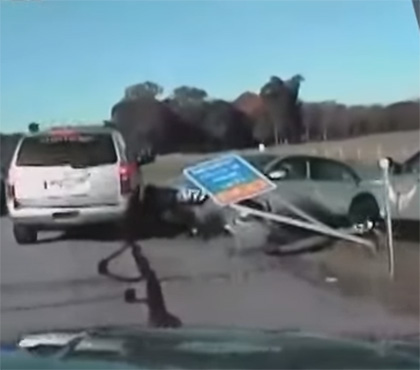 CLEVELAND — A 10-year-old boy led police on a high-speed pursuit that began in Cleveland and ended miles away along the Ohio Turnpike when state troopers boxed him in, and police say it's the second time in two weeks the boy has taken cars on joyrides.

Authorities say no one was injured during the pursuit that began around 9:30 a.m. Thursday when Westlake police saw a car speed by chased by another vehicle, possibly driven by the boy's mother, on Interstate 90 west of Cleveland.

A man called 911 and reported the boy's car was swerving in and out of traffic and had almost run several vehicles off the road. He also said a woman was following him in a red SUV. A woman called 911 and said the boy appeared to be driving around 90 mph.

Three Westlake officers tried to stop the 2004 Toyota Avalon along the interstate and followed it for more than 15 miles (24 kilometers) at high speeds until the boy drove through a toll booth and entered the westbound lanes of the Ohio Turnpike, Westlake police Capt. Guy Turner said.

Highway Patrol Sgt. Tim Hoffman said that's when at least four state troopers began joining the chase and attempted a rolling roadblock as the boy drove erratically along the turnpike with speeds reaching 100 mph (161 kph). After a pursuit of around 20 miles (32 kilometers), the boy slowed down and veered onto the grassy berm to avoid driving over stop sticks, Hoffman said. That's when one trooper used his cruiser to nudge the boy's car into a sign. Other police cars blocked the vehicle and prevented it from re-entering the road.

“It was very lucky no one was hurt,” Hoffman said.

The boy was taken to a hospital accompanied by a legal guardian, the Highway Patrol said. He will be placed in the custody of Erie County Children's Services after being evaluated. The patrol said it will confer with prosecutors about criminal charges.

A Cleveland police report shows that the boy previously stole his mother's 2013 Dodge Charger on Oct. 16. Police went to the mother's home and, a short time later, other officers responded to a call about a car driven by a small boy on I-90 in Cleveland in the high-speed lane with three flat tires, according to the report.

The boy was arrested and taken to the Cuyahoga County Juvenile Justice Center and released to his mother.

Copyright Associated Press. All rights reserved. This material may not be published, broadcast, rewritten, or redistributed.