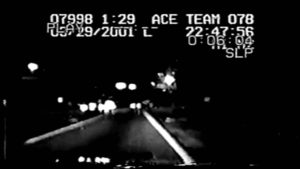 Police vehicle pursuits are inherently dangerous for the officers, the offenders, as well as innocent bystanders, with some pursuits ending in tragedy. When a collision occurs, people who are injured — or the relatives of those who have died — sometimes elect to take legal action against the police.

Section 1983 is the tool that allows citizens to file suit against state actors — the government, which police officers are an element of — who violate federal law or the Constitution of the United States. Applying Section 1983 to police pursuits can be confusing because — depending on the underlying facts — two different constitutional amendments might apply.

Typically, either the Fourth Amendment or 14th Amendment will apply. Let’s examine each type of case — citing important and relevant Supreme Court decisions — in turn.

“If neither of these actions takes place there is no seizure and thus, the Fourth Amendment is inapplicable,” said Laura Scarry, an attorney well versed in such matters. “In the context of a pursuit, the Fourth Amendment will apply in cases involving PIT maneuvers or some other deliberate contact by police officers with the suspect’s vehicle or the suspect himself.”

Recently, the U.S. Supreme Court decided the fate of police officers under the Fourth Amendment. Scott v. Harris, 550 U.S. 372 (2007) was analyzed under the Fourth Amendment because the deputy pursuing the suspect driver — Scott — rammed his squad into Scott’s vehicle causing the vehicle to crash and rendering Scott a quadriplegic. The Court held the maneuver was not unreasonable.

“In using this case in training, I was always careful to point out that the case was not about a police pursuit,” Scarry said. “It was a use of force case that was in the context of a police pursuit. Anyway, the Supreme Court analyzed the deputy’s conduct in ramming Scott’s vehicle (the use of force) by utilizing Graham v. Connor’s objective reasonableness test.”

Another recent USSC case — Plumhoff v. Rickard, 134 S.Ct. 2012 (2014) — also involved a police pursuit (at first), but when the suspect’s car was cornered, officers fired at the suspect’s vehicle killing both the suspect and the passenger. Because the suspects were killed by bullets that were fired by officers, they were then “seized” by the officers and, as such, the Fourth Amendment would apply.

Another attorney well versed in Section 1983 issues, Terry Dwyer, said of the case that the Court had to look at the totality of the circumstances per Graham v. Connor — the analysis of the use of force would use the “objective reasonableness” test.

“The Court went further and said even if the use of force violated the Fourth Amendment the officers would be entitled to qualified immunity because it was not clearly established statutory or constitutional right that their conduct violated,” Dwyer said. “There is a bit of a cautionary analysis for anyone interpreting Plumhoff and that is not to assume the decision now authorizes police to shoot at moving vehicles or eases the strictures of sound pursuit policy.”

The most recent United States Supreme Court case — Mullenix v. Luna, 136 S.Ct. 305 (2015) — involved a high-speed pursuit in which a Texas state trooper set up on an overpass to await the driver of a car being pursued by other officers. The trooper fired several shots at the vehicle causing the vehicle to roll over several times and crash. The driver had been shot several times. Again, because the driver had been “seized” by the trooper’s bullets, the Fourth Amendment would apply and the analysis would use the “objective reasonableness” test enunciated in Graham v. Connor.

“The defendant’s family sued under 1983 claiming excessive use of force and an impermissible Fourth Amendment seizure,” Dwyer said. “The decision did not address the Fourth Amendment claim, only the question of whether the officer had qualified immunity. The Court said that prior case precedents had not established that the officer’s action were objectively unreasonable.”

What happens when an officer pursues a suspect, but the officer never makes any contact with the driver and the driver loses control of his vehicle killing himself or killing an innocent third party? If the pursuit ends in an accident where the officer did not intend to do what he did, the 14th Amendment — specifically, the substantive due process clause of the 14th Amendment — will apply. This means the difficult “shocks the conscience” test must be met by the plaintiff.

Scarry said that County of Sacramento v. Lewis, 523 U.S. 833 (1998) set a very high standard of culpability — a purpose to do harm — that is extremely difficult for plaintiffs to overcome. To be arbitrary and unconstitutional the conduct would have to be outrageous or particularly egregious. The Lewis case involved an officer running over the passenger of a motorcycle that was being pursued by the officer.

“The legal standard is often referred to as the ‘shocks the conscience’ standard,” Scarry said. “In a nutshell, the plaintiff must establish that the police officer pursuing the suspect intended to harm the suspect. This is why it is extremely rare for police pursuit cases — that do not involve seizures — to be litigated under Section 1983. Instead, police pursuits under these facts will be litigated in state courts under state law where the level of culpability is much less. That’s not to say that we do not see these kinds of cases litigated under Section 1983 — usually we see them filed by plaintiffs’ attorneys who are not that familiar with Section 1983 cases and the difficult burden they have in prevailing.”

As was the case in Lewis, that conduct will not typically be deemed shocking to the conscience.

So, what we have here is a series of cases that looks at police pursuits within the 1983 framework for constitutional violations, in these instances either as Fourth Amendment unconstitutional seizures or 14th Amendment substantive due process violations.

As we see from Scott v. Harris the Supreme Court created a pretty high burden for a plaintiff to show a substantive due process violation. With the Fourth Amendment cases it is a matter — as in any use of force scenario — of considering the objective reasonableness of the officer’s actions. Some would argue that the question of objective reasonableness in Plumhoff v. Rickard was a factual issue better left to a jury.

None of the above mentioned cases address the state law negligence claims and intentional tort claims that can result from a pursuit gone bad, which are guided by state statutory and case law. That’s an entirely different matter for another day.

Doug Wyllie is Editor at Large for PoliceOne, providing police training content on a wide range of topics and trends affecting the law enforcement community. Doug is the 2014 Western Publishing Association “Maggie Award” winner for Best Regularly Featured Digital Edition Column, and has authored more than 1,000 articles and tactical tips. Doug hosts the PoliceOne Podcast, Policing Matters, and is the host for PoliceOne Video interviews. Doug is a member of International Law Enforcement Educators and Trainers Association (ILEETA), an Associate Member of the California Peace Officers’ Association (CPOA), and a member of the Public Safety Writers Association (PSWA).

Want to learn more about pursuit training, technology and policy?