At the top of the list of concerns for law enforcement administrators is their agency’s motor vehicle pursuit policy. Vehicle pursuits and use of the PIT maneuver hold the highest potential for officer injuries, negative public relations, damaged property and threats of legal action. Options for minimizing the risk of pursuits may lie in full knowledge of the limitations of the PIT maneuver. 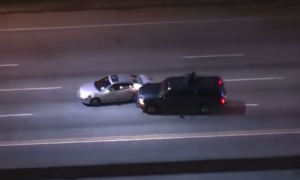 PIT stands for pursuit immobilization technique, a manner of disabling a vehicle that originated with the California Highway Patrol in the 1970s. The PIT was later perfected by an advanced driving and police pursuit academy based in West Virginia. Thereafter, police agencies across the United States have adopted and viewed the PIT as a relatively safe technique for ending a pursuit.

The PIT technique requires approaching the fleeing vehicle diagonally from behind. The pursuing officer must match the speed  of the fleeing vehicle as closely as possible. With a slight impact, the officer maneuvers the vehicle to gently push the suspect’s rear bumper, with the intent of sending it into a spin. The officer’s vehicle continues forward as the suspect’s vehicle is disabled.

The abrupt change in thrust direction of the fleeing suspect’s vehicle will typically stall the powertrain, which essentially ends pursuit. The often stunned suspect can then be taken into custody.

Although viewed as effective and safe by many, the PIT maneuver has a substantial number of critics. Here are a few common concerns and suggestions for improvement.

Critics claim that the PIT maneuver constitutes a use of lethal force. Some view use of the PIT maneuver by a poorly trained officer under risky conditions as an action that could cause serious injury or even death to the fleeing subject or bystanders.

Proponents of the technique strongly believe in its effectiveness and efficiency, but successfully and safely executing the PIT maneuver requires excellent administration of the technique. This level of precision execution requires superior training by seasoned officers, which unfortunately isn’t habitual due to staffing shortages and a lack of time and funding.

Many agencies across the United States have adopted policy limitations restricting use of the PIT maneuver over 40 mph. Some agencies even lower the threshold for execution to 30 mph.

While agencies have used the PIT maneuver with success, it is best used at slow speeds on flat, dry surfaces and on vehicles that have a low center of gravity. As speeds, pursuit environments and vehicles will vary, the likelihood of a successful execution of this technique also varies greatly according to research done by Geoffrey P. Alpert at the University of South Carolina.

Since approximately 2012, vehicles are now required to come equipped with electronic stability control. Researchers observed in 2008 that the PIT maneuver may be less effective on vehicles equipped with ESC. Further data illustrated additional necessary steering input, modified acceleration and braking to successfully execute the PIT on a target vehicle equipped with ESC.

The Portland Police Bureau shared additional research in 2015 that illustrated how secondary impacts were more common in target vehicles equipped with ESC than without. Additionally, the severity of secondary impacts increased at speeds higher than 45 mph.

The officer and citizen injuries and deaths resulting from high-speed police pursuits are shockingly high. Innocent third-party observers who just happened to be in the way add up to 42 percent of persons killed or injured during pursuits. USA Today reports that more than 5,000 bystander and passenger deaths have occurred as a result of police pursuits since 1979, and other research shows that roughly 40 percent of police pursuits result in crashes.

With these statistics, as well as modern vehicle safety features like electronic stability control, executing a PIT maneuver has become more complicated for law enforcement. Continued research of the PIT on newer vehicles will be necessary to ensure that the technique remains effective, and officers will need to train thoroughly so they can effectively execute the PIT without incident.

During a pursuit, officers are charged with the responsibility of protecting the public while placing themselves at risk and making decisions under duress. Clearly defined policies and thorough training can dramatically reduce the risks of officer and civilian injury and threats of legal action.

Melissa Mann recently retired from the field of law enforcement. Her experience spanned 18 years which included assignments in Corrections, Community Policing, Dispatch Communications, and Search and Rescue. Melissa holds a BS in Criminal Justice and MA in Psychology with emphasis in studies on the psychological process of law enforcement officers. She holds a deep passion for researching and writing about the lifestyle of police and corrections work and the far reaching psychological effects on the officer and their world.