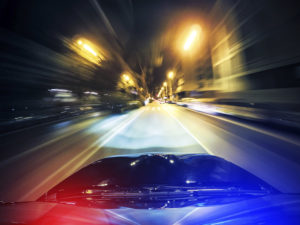 It is important to weigh the need to pursue a stolen vehicle against the safety of the officer and the motoring public. (Image/iStock)

The overwhelming majority of vehicle pursuits are initiated for traffic violations. However, at roll call in just about every department in America does a run down of their list of vehicles known to be stolen, and officers out on patrol are on the lookout for those cars.

Because the driver of a stolen vehicle is not the registered owner, officers cannot simply go to the RO’s residence and await their return. So when an officer sees a vehicle reported to have been stolen, they typically call it in and initiate a pursuit.

Typically when an officer sees a stolen vehicle they will verify the vehicle is in fact stolen before any action is taken. Once it is determined that the vehicle is reported to be stolen, an officer will attempt to stop it using just lights and siren. If a pursuit is initiated, then the officer should keep in mind that the stolen vehicle is still a “property crime” unless there are mitigating factors such as a carjacking, it was used in an armed robbery or a violent crime.

Depending on the situation regarding the vehicle, the officer — and probably also his/her supervisor — will continue to ask and answer the question, “How much police action should be taken and to what extent a pursuit will continue?”

According to Mike Nelson of the Forsyth County Sheriff’s Office training unit, “The percent of stolen vehicle pursuits is relatively low. The statistics will vary and there are many variables such as the amount of pursuits in one agency to another. Typically the average percentage is around five percent. Also the area of the country plays a role in the amount of stolen vehicles and chase percentages. An urban department will typically be involved in more pursuits, however while a rural agency may have fewer pursuits they may have more stolen vehicles.”

Why do people steal cars and run from the cops?

“Right now the trend in metro Atlanta is for a two person car pull up at a gas station and while some one is inside paying for gas the vehicle is stolen. This is happening quite frequently now. The cars are mainly taken to shipping units and shipped overseas. However ‘chop shops’ are still functioning and many cars are parted out and sold,” Nelson said.

Nelson said that one day in the near future technology will slow the number of stolen vehicles. In-car technology such as ONstar, GPS, and other as-yet-to-be-imagined solutions will likely lead to a reduction in the need for police pursuits of stolen vehicles. However, Nelson cautioned that even as the technology becomes more sophisticated, there will be someone who can defeat the system.

“Criminals today are more ‘Tech-Savvy’ than they used to be, so police pursuits of stolen vehicles will never end completely. Also, police technology also will play a part in slowing police pursuits. For instance the GPS tracker that can be initiated from a pursuing vehicle to the stolen or vehicle being pursued by shooting it from the pursuing police car and attaching to the stolen car. This will reduce the speeds of the police as they are able to follow the car on a map,” Nelson said.

Safety for officers and innocent motorists must be paramount

We see altogether too many headlines that begin, “Stolen vehicle pursuit ends in crash…” in part because when you have a stolen vehicle, it can be concluded that the driver has either already committed another crime, or another crime is imminent. Officers trying to stop drivers who they might believe to be dangerous might also get a little more excited than if merely pursuing a traffic violation.

It is extremely important to weigh the need to pursue a stolen vehicle against the safety of the officer and the motoring public. At the end of the day a stolen car is a property crime. However, attention should be given to what the circumstances are that the car was stolen and what crimes the vehicle and occupants have been used in. For instance the need to stop the car is greater when the occupants committed violent crimes in the stolen car, versus a car used in a joy ride.

Good counsel. Stay safe out there.

Doug hosts the PoliceOne’s Policing Matters podcast, and is the host for PoliceOne Video interviews.