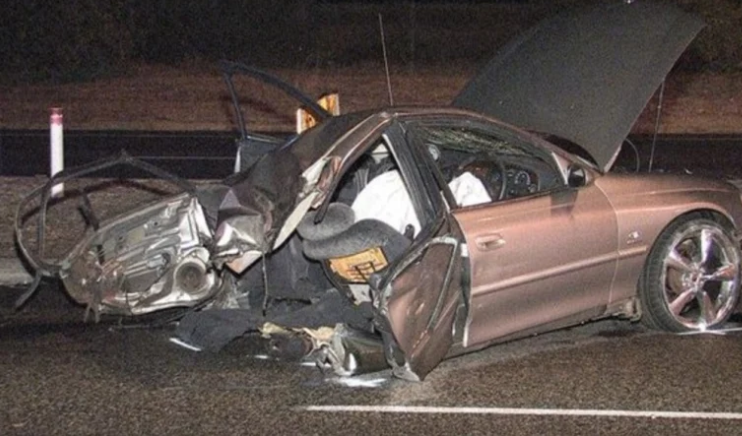 A police officer who pursued a car which later crashed into a tree, splitting in half and killing three people, has broken down while giving evidence at a coronial inquest.

Ms Armstrong and Mr Eades were a couple and left behind three young children, while Mr De Agrela was Conduit’s brother.

During a coronial inquest into the trio’s death on Wednesday, it was revealed Conduit was giving the couple a lift to a nearby IGA when two police officers patrolling Cockburn Gateway shopping centre spotted the vehicle speeding down Wentworth Parade.

The police driver, Senior Constable Joel Vanson, decided to pull the vehicle over and activated his lights, before Conduit accelerated and drove through a red light, prompting Senior Constable Vanson, a qualified pursuit driver, to activate his siren and give chase.

Conduit’s car reached speeds of more than 140 kilometres an hour as it drove along Midgegooroo Avenue and North Lake Road.

Senior Constable Vanson said when he saw Conduit turn the car’s headlights off and veer onto the wrong side of the road, he immediately aborted the pursuit.

“I immediately took my foot off the accelerator and turned off my lights and sirens because the risk … far outweighed the benefit we would have got for stopping a bloke for running a red light,” he said.

“[The car] went out of view … it went around a left-hand bend.

“We came around that bend and I could see either smoke or steam or something just covering that part of the road.”

Senior Constable Vanson was overcome with emotion when recounting what he saw at the crash scene to Coroner Barry King.

“It had literally been ripped in half … I couldn’t see anyone in the back seats … I heard screaming coming from further along down North Lake Road,” he said. “Sorry, it was terrible.”

Ms Armstrong and Mr Eades, who had been travelling in the rear of the car, were not wearing seatbelts and had been thrown from the vehicle.

Senior Constable Vanson found them both on the side of the road. They had died instantly.

A passerby who was a nurse tried to help Mr De Agrela, who was trapped in the passenger seat, but he died a short time later.

Senior Constable Vanson said since the incident he had “reluctantly” engaged in other pursuits.

“Dealing with death and that sort of thing comes with the role as a police officer … but being directly involved in a scenario where something like this has happened … it puts a different spin on things and it’s not something you can explain or understand unless you’ve experienced it,” he said.

“Their motivation for doing that, you don’t know unless you pursue them.”

He then went on to say he believed police officers trained in pursuits should receive further practical training after passing their assessment.

“Short of being required to use lethal force on another person, this is probably the riskiest thing police do,” he said.

He told Ms Wood he could not see if any passengers were in the car when he was pursuing it and police had not received any information about the vehicle based on its registration.

Two civilians who witnessed the crash told the inquest they did not hear sirens, or see a police car in the vicinity when it occurred.

Marcus Downs, whose car was sprayed with debris from the crash resulting in two of his tyres popping, said he estimated a police car arrived at the scene “a minute or more” after the crash and was travelling at regular road speed.

Coroner Barry King, whose task it is to determine if police played a role in the deaths, said previous inquests into police pursuits had led him to question if pursuit guidelines were clear enough for officers.

Mr Eades’ aunty, Jennifer Loo, said sitting through the inquest had been difficult, but that the family still believed there were questions that needed to be answered.

“It’s hard because it just reopens everything again,” she said.

“We want to know what the truth is.

Ms Loo declined to comment on whether she believed police had contributed to her nephew’s death.