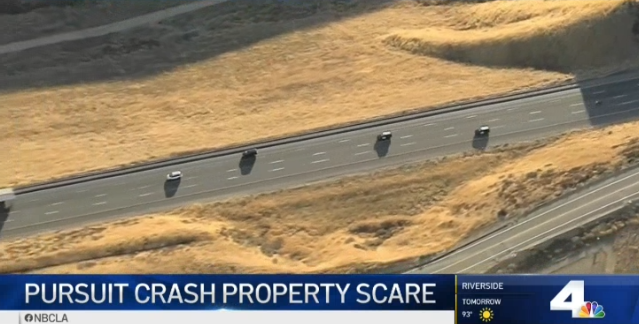 A police pursuit north of Los Angeles ended when a stolen minivan crashed Tuesday into a block wall outside a Castaic home.

The homeowner said he heard patrol car sirens followed by a loud “boom” when the minivan slammed into the wall in his backyard. He looked outside to see dust flying.

“It was a little intense,” said resident Fred Jochen with a laugh. “I got my gun, loaded it thinking someone was going to hop over my wall.

“Went into combat mode, I guess.”

The vehicle, which authorities said was stolen in the San Joaquin Valley, was speeding on the 99 Freeway near Bear Mountain Boulevard in Bakersfield, which led to the pursuit, according to the California Highway Patrol. The vehicle traveled at high speeds on the 5 Freeway southbound, with the CHP Newhall taking over the chase.

Newschopper4 Alpha was over the chase around 5:50 p.m., as the vehicle was traveling at speeds around 100 mph on the 5 Freeway southbound.

The CHP appeared to deploy a spike strip, with the chase vehicle losing a tire. Soon after, the vehicle exited the freeway, but the lost tire led to the minivan spinning out.

Still, the driver continued on.

A few moments later, the driver attempted to make a left turn, but the minivan was unable to stay on the road and crashed into some brush and a wall at Jochen’s home.

A man exited the vehicle and surrendered to officers without further incident.

Luckily no one was hurt, but there was property damage. This would have been a perfect opportunity for StarChase to tag and track.