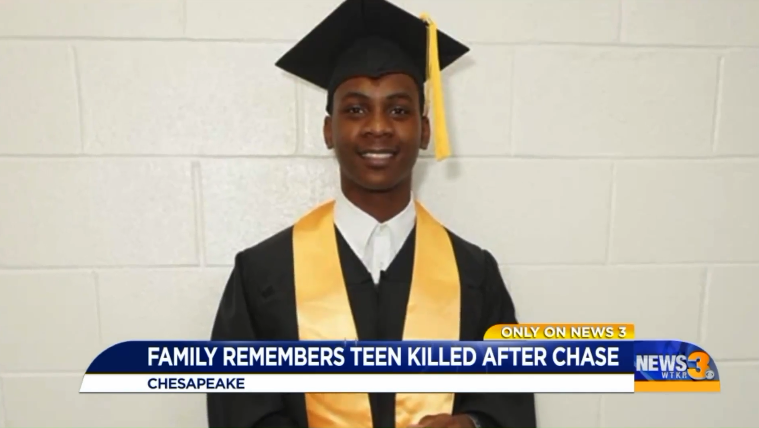 NORFOLK, Va. – In the 17 years Ray’Quan Bethea was alive, his family says he lived his life to fullest.

“He was always in a good spirit, always trying to make you feel better if you were in a bad mood. [He was always] laughing and joking,” his mother, Shavonne, said.

That all ended this week when the teen was killed in a car accident.

Ray’Quan was a passenger in the white Volvo that crashed near the intersection of Indian River Road and Wilson Road.

Police say the car was stolen and the driver led officers on a chase through Chesapeake and Norfolk.

Police say after the car flipped on its side in a field, the driver took off on foot. They are still looking for that individual.

Norfolk Police later charged a passenger, 19-year-old Darquez White, with Possession of a Firearm by a Felon.

The other juvenile passengers in the vehicle were also hurt, but Ray’Quan’s injuries were the worst. His family says he was ejected from the car’s sunroof and not given medical attention right away.

He was transported to the hospital, but his grandmother, Adrienne, says it wasn’t until hours later that she got a call saying he was admitted.

When they arrived, he had just gotten out of surgery and was in the ICU but had lost a lot of blood.

But it was too late. The teen took his last breath at the hospital.

“Regardless of whether them children were doing right or wrong, he should have never died the way that he died,” said Adrienne.

The family will hold a candlelight vigil at 6:30 p.m. on Friday near the intersection where the crash happened.

They hope family and friends can say goodbye and honor the short life Ray’Quan lived.

Both Chesapeake Police and Norfolk Police are conducting a joint investigation, and more charges are pending against the driver and passengers involved, they said.