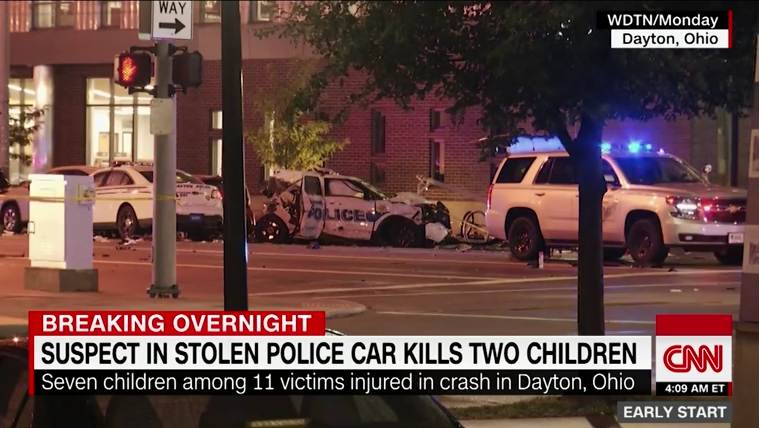 The incident started when officers responded to a stabbing on Xenia Avenue shortly at about 7:11 p.m. Monday. Police said the victim, who was bleeding from his head, arms and chest, told officers his son, Raymond Walters Jr., had stabbed him and took off in his truck.

Officers located the truck, which went off the road and hit a tree, in a woman’s front yard on Airway Road. Dayton police said a Riverside officer got out of his cruiser to apprehend Walters. That’s when he got into the police car.

According to Dayton police, the officer used his taser on the suspect to stop him from getting away in cruiser, but that was ineffective.

Walters sped into Dayton with the cruiser’s lights activated. At 7:22 p.m., he ran a red light and collided with an SUV, then hit a minivan that was pulling away from the Dayton Metro Library on East 3rd Street.

Dayton police said Walters was driving at 97 mph at the time of impact, splitting the cruiser into pieces. He continued to resist, until he was taken into custody.

Three adults were inside the SUV, and one adult and seven children were in the minivan. Two of those children were killed in the crash and a third remains in critical condition.

The rest of the victims are stable or have been treated and released.

Walters, 32, has a lengthy criminal history, including burglary, robbery, and assault. He is currently on parole.