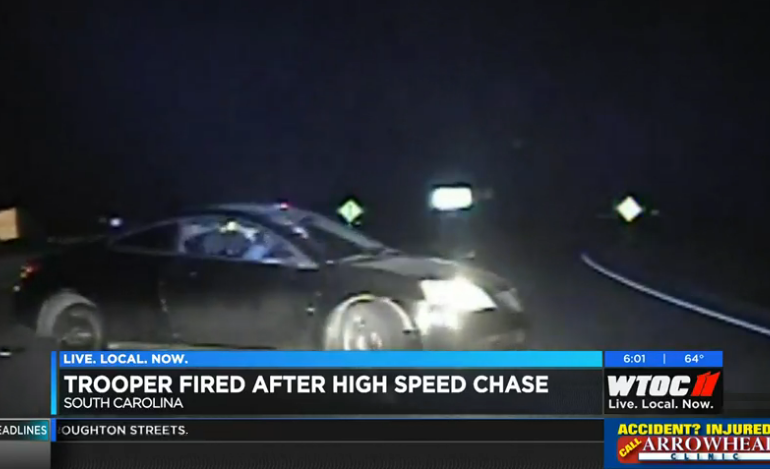 The dash cam footage shows a high speed chase through Beaufort County and ending in Colleton County. This chase involved the trooper shooting at the suspect.

The South Carolina Department of Public Safety stated in its investigation that Trooper Jordan Ward did not follow policy and should have never fired his gun.

The dash cam video was released by the South Carolina Highway Patrol. It shows a dark colored Pontiac running a red light. Trooper Ward immediately responds and the Pontiac takes off.

Two minutes into the chase down Trask Parkway, the Pontiac spins out, crossing several traffic lanes. Trooper Ward orders the driver out of the car. When he doesn’t respond, Trooper Ward fires a single gunshot and the driver takes off in his car again.

The Department of Public Safety report issued after Trooper Ward’s incident cites “officers shall not discharge a firearm… unless the use of deadly force is justified.”

In parts of the video you can see Trooper Ward was not 100 percent confident the driver had a gun. In the video he says the following:

“10-4 I fired one shot, one round, one round. I did not strike the suspect. Suspect looked like he was reaching to the floorboard for a gun.”

“Negative he reached to the floorboard to look like, looked like a gun and at that point I fired one shot.”

“10-24 I am not sure he does have a weapon however he did reach to the floorboard in what looked like he was reaching for something.”

In the span of 5 minutes, 42 seconds Trooper Ward had initiated the chase, shot at the suspect, and pursued the driver a second time with speeds reaching as high as 113 miles per hour.

We don’t know the Pontiac driver’s thought process, but the video shows no sign of him stopping. At one point, his tire even separates from the rim.

After 20 minutes, the chase ended at the driver’s home in Colleton County.

Immediately following the chase, Trooper Ward was suspended without pay. He was let go on Nov. 8 after an investigation.

The narrative describes Trooper Ward as in violation of department policies saying the suspect “did not pose an immediate threat to Trooper Ward’s safety or to the safety of others.”

Our sister station WCSC reports the drivers name was Robert Lamont Wilson. He was arrested on charges of disregarding a traffic control device, failure to stop for blue lights, driving under suspension 3rd or subsequent offense, and operating uninsured and expired vehicle license.