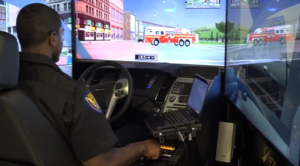 One of the coolest parts of any police academy is when you get to train for pursuits on the emergency vehicle operations course, or EVOC. EVOC is where you learn to drive fast, do those James Bond-like turns and reversals, and maintain positive control of the car under the most adverse of conditions.

That’s the way it’s supposed to work, anyway. In academies for highway patrol and state police personnel, there is usually considerable time and resources devoted to driver training, as that is what the graduates will be doing for a good portion of their working lives. State patrol/police officers tend to be very good drivers, and they don’t stack up their cars as often as local cops do.

Training academies for local law enforcement (and it’s rare that state police/patrol students attend the same basic school as the local cops) usually don’t have the same time or facilities to devote to driver training. The better-equipped academies have a dedicated training track with a floodable skid pad. More likely, the academy staff moves the training venue to an airstrip or unoccupied parking lot for driver training.

Instructors are likely to be officers who are assigned this as a collateral duty, and who don’t get to polish their skills as often as they would like. There may or may not be a classroom session to discuss the physics of high-performance driving. It’s all but unheard of for students to be able to practice their EVOC skills on a public highway, with real-world traffic.

Contrast this with the driver training model used in the United Kingdom (UK). Entry-level student constables get very little driver training, as they might not be driving at all. If they do drive, they will likely be in compact, underpowered vehicles intended solely to get the constable to where he is going, with few special features or emergency equipment. High-performance and prisoner transport vehicles are operated by advanced response drivers only.

After at least two years of exemplary service, a constable can apply to become an advanced response driver. This entails completing a 15-week training program that combines classroom, closed track, and open road experiences. Several exercises are conducted on open public streets that are often congested, with the student driver moving the vehicle at emergency-level speeds while giving a running commentary on his thought process to the instructor in the passenger seat. The fact that the citizens of the UK tolerate the police running pursuit training exercises on their streets is testimonial to the level of trust and cooperation the police enjoy with the public.

It’s also noteworthy that this program that is dedicated solely to driving skills is approximately the length of some basic academy courses in the United States that incorporate all topics.

But we can’t afford that

It’s not likely that U.S. police will have the luxury of this extended driver training anytime soon, given limited budgets and other resources. That doesn’t mean that driver training is beyond the reach of the typical local agency.

Computer-based driving simulators are often available to regional academies and some larger agencies. However, they can also be expensive. A few training agencies have tried to make these mobile facilities by setting them up in large trailers or making the equipment modular.

The simulators are valuable for their ability to replicate most any driving condition, and no matter how many times the student officer wrecks the car, a reset button makes everything whole again. Because the simulators cannot produce G-forces and many of the other environmental conditions of real high-performance driving, they have limited application. They are useful for training on policy and thought processes in a risk-free environment.

For example, the instructor can set up conditions where department policy might permit a pursuit to be initiated, and then change the environment slightly so that the pursuit is prohibited under those circumstances. Similarly, the instructor might insert a situation that calls for the pursuit to be terminated, and see if the student recognizes those conditions. Simulators are also excellent for practicing radio communications under realistic conditions.

Another opportunity to train for pursuits is to hold a debriefing after a pursuit. This isn’t just for the people directly involved in it, or part of any disciplinary investigation. The debriefing is for everyone, where any recordings of radio traffic and dash/body cam footage is available for viewing.

When agencies do this, they frequently reserve the occasion for pursuits that went badly, or resulted in some high-profile outcome. To discard the less-spectacular pursuit is to waste a teaching opportunity. By discussing and emphasizing the aspects of the event that went well, in addition to those that were less ideal, reinforces good tactics in a realistic environment that is relatable to everyone.

These debriefings shouldn’t be star chambers, where anyone involved dreads having their actions held up for criticism and ridicule. Instead, the purpose should be to get the word out on what really happened (because the rumor mill is powerful in virtually every law enforcement agency), and maybe give some insight into how it could have gone better. This way, officers learn to improve on every operation and seek excellence, rather than just compliance with policy.

These debriefings can be broken up into five or ten minute segments to become part of roll call training, reinforcing a manageable chunk of policy every day.

Experience is the best teacher

Although the trend on pursuit policies seems to be to restrict pursuits more than permit them, one of the best ways to improve police officer performance in car chases is to allow the officers to do them. The first time anyone performs some high-risk tactic, it often goes wrong. The moves are unfamiliar, and the actor can be so preoccupied with getting it right that they lose focus on the task.

This situation improves as those tasks are repeated and skills develop. This works with pursuits as it does with anything else. When the officer has gotten over the excitement of doing something for the first or second time, he can think about the process and perform the necessary constant reassessment that a pursuit requires. This requires strong leadership and mentoring from the agency’s supervisors, but the result is a more competent and more effective law enforcement agency.

Tim Dees is a retired police officer and the former editor of two major law enforcement websites who writes and consults on technology applications in criminal justice. He can be reached at tim@timdees.