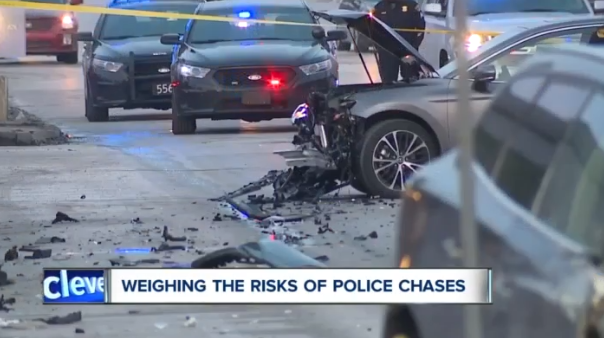 CLEVELAND — Ward 6 City Councilman Blaine A. Griffin is asking Attorney General Dave Yost to reconvene an advisory group to look at police chases that cross city lines, such as the one that began Wednesday in Shaker Heights and ended in the ward he represents.

“People were outraged and people were traumatized. They felt like they were in an action movie,” Griffin said of the scene to which he responded Wednesday morning.

This pursuit came just a few weeks after one that began in Cleveland and ended in East Cleveland, killing a 13-year-old girl who was walking in the area.

“Too many tragedies are happening, Griffin said. “We have too many citizens that their safety is in jeopardy because of these police chases.”

“Children are going to school in the morning,” Griffin said. “Citizens are going to work. We have to make sure that we have the best practices and policies in place to protect our citizens.”

The pursuit that ended Wednesday morning in a crash on Woodland Avenue began on Kendall Road in Shaker Heights.

Ed Savol told News 5 he had been watching TV in his recliner just after 6 a.m. when the back door opened and four young men came in.

“The next thing I know, I got a gun to my head,” Savol said.

Savol said the thieves took all the cash he had, about ten dollars, and one of his credit cards. He said he gave them a fake PIN when they asked about his debit card. They ripped the TV off its stand and the alarm system off the wall before looking for Savol’s car keys.

“I went in to show them where they’re at,” Savol said. “He said, ‘I got the keys,’ and he knocked me down on the floor.”

After the thieves took off in Savol’s vehicle, which he said he just got in October, Savol managed to get to the phone and dial 9-1-1.

Later, an officer at his house told him that his vehicle had been found. In a press release, Shaker Heights police said “officers located the victim’s vehicle in the City of Cleveland; occupied and being operated by male suspects. After several minutes of tactically following the vehicle and utilizing the assistance of Cleveland Division of Police officers, the operator of the vehicle was involved in a one car crash in the 8000 block of Woodland Avenue in the City of Cleveland.”

“Totaled,” Savol said. “The whole front end—all the airbags, side airbags, front airbags, are deployed. The back hatch was popped open.”

By Wednesday night, he’d already replaced the stolen TV and said he would go to court if needed to pursue justice against the people who did this.

“You gonna mess with me, I’m going to make sure you don’t do nothing again,” Savol said.

He urged people to watch what was going on in their houses and around their properties, “so this doesn’t happen to you, too.”

Savol came away with just a scratch on his elbow, but he said it could have ended differently.

“Last year, I went through a lot,” Savol said. “I had prostate surgery and everything. That was my big worry, but now with this guy sticking a gun in my face, I said, ‘The surgery didn’t kill me, but this idiot’s gonna kill me,’ and I said, ‘I don’t need that.’”

Shaker Heights police ultimately detained two suspects, who were both treated at the hospital.

Savol’s granddaughter, Kathleen, was upstairs sleeping when all of this happened.

“The only thing I’m thinking is, ‘It’s just a TV, it’s just a game system, it’s just some money, it’s just a car,’” Kathleen Savol said. “Those are materialistic things. We can replace those. I can’t replace my grandfather.”

She had something to say to the people who did this.

“You traumatized many people while you were going through this, but that was OK cause you had your fun?” she said. “That’s sick.”

Bystander killed when pursuit in Los Alamitos ends in crash