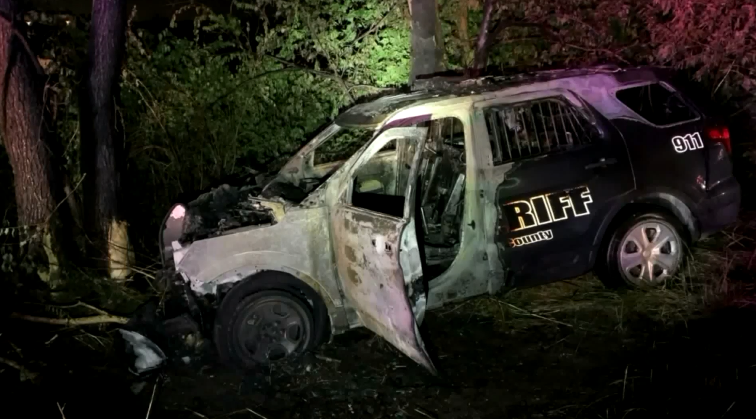 The county sheriff said it’s part of a much bigger problem.

When deputies tried to pull over 36-year-old Charles Rice from Kansas City, he went speeding away. Two deputies spotted him going at least 70 mph in a 35 mph zone.

The chase happened around 11:30 p.m. on a curvy road when a Cass County sheriff’s deputy crashed his cruiser during the pursuit. His cruiser caught fire as another deputy pulled him from the wreckage.

Rice had to be tracked down using a drove and infrared scopes.

Cass County Sheriff Jeff Weber said the deputy, who’s in his 20s, is now in the hospital with serious injuries. The remains of his patrol car prove it was a dangerous situation.

Rice has a long criminal history that includes more than 150 pages of offenses — as well as 20 outstanding arrest warrants out in Cass County.

“He was on probation for a four-year stint. Yet, even with 20 pending charges, they haven’t revoked his probation,” Weber said. “This is the problem.”

He said Missouri laws have become too lenient on repeat offenders — and many of them know that leading police on chases, like the one Rice led deputies on Monday, won’t hurt their record as much as Weber would like.

“We’ve created a system here that almost gives criminals an incentive to say, ‘Look if I flee at a high rate of speed, putting the public, the deputy, myself, everybody in danger, a lot of agencies aren’t even going to chase,'” Weber said. “‘If they do chase and I get caught, a lot of courts are just going to say, “Don`t do that again.”‘”

The sheriff adds that while laws aren’t as strong as he’d like, he believes the people of Cass County want criminals behind bars — and his deputies are paid to chase them down.

Weber said he and other sheriffs are pleading with Missouri lawmakers to adopt stiffer penalties for suspects who flee from law enforcement and start these chases.

Rice is now being held in the Cass County jail, facing charges of felony resisting arrest by fleeing, creating a substantial risk of serious injury or death and driving while revoked.

Rice’s bond is $150,000 cash only. He’s expected to be arraigned tomorrow in Cass County court.