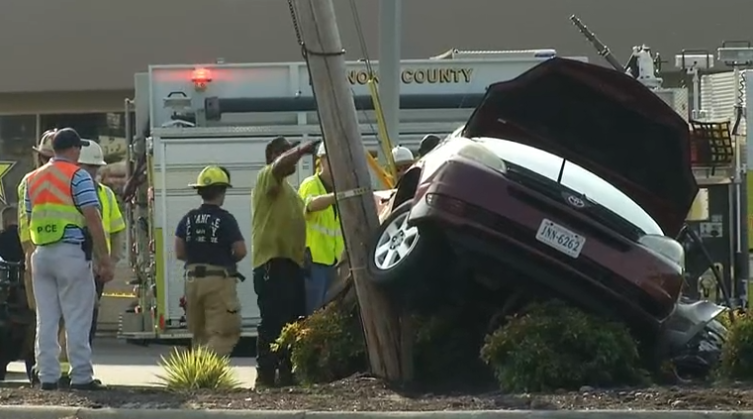 Alcohol, drugs and speed may have been factors in a crash on Brambleton Avenue that left one dead, according to Roanoke County police.

A Volvo sedan driven by an unidentified man was headed southbound on Brambleton Avenue when it rear-ended a Toyota driven by Thomas Orr, causing Orr’s vehicle to strike a utility pole, according to Roanoke County police.

Orr, 48, was wearing a seat belt and died at the scene.

The Volvo continued southbound on Brambleton Avenue, where it struck a Cadillac and pushed the Cadillac into a pickup truck, according to Roanoke County police.

Larry Karns and his wife witnessed the entire thing happen as the Volvo barreled at them and caused destruction in front, to the side, and behind them, but left their vehicle unharmed.

“It’s terrible, I’ve been to Vietnam and I’ve seen a lot of car wrecks because I used to drive for a living, I’ve never seen an accident this bad before,” Karns said. “We were sitting at the red light, first in line, and I looked up, and we saw a car coming down the middle lane, coming toward us, and I couldn’t tell exactly, but  it had to be going 80 or 90 because he was moving right along.”

Karns tried to help the driver of the Volvo but the damage was so bad he was unable to do so.

“I jumped out and tried to get his door open, but I couldn’t get him out because the steering wheel that should have been on the other side of the car was on the side of the car where he was at.” Karns said. “There’s an angel on my shoulder and God was looking out for me.”

The accident is completely clear and all lanes of traffic are now open.

Charges are pending and the investigation is ongoing.