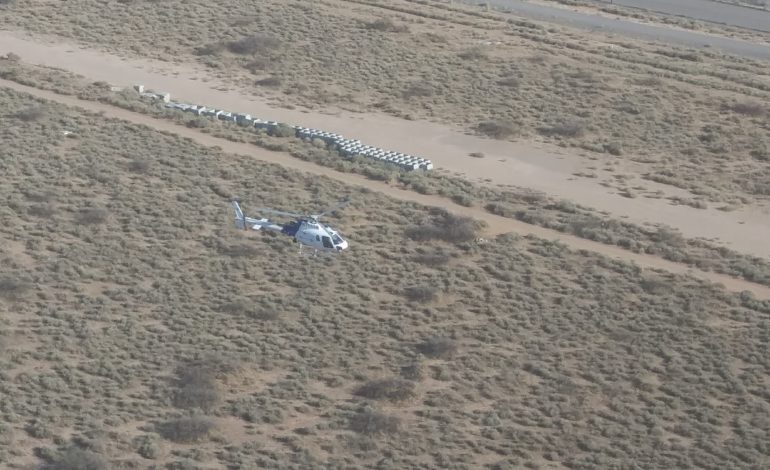 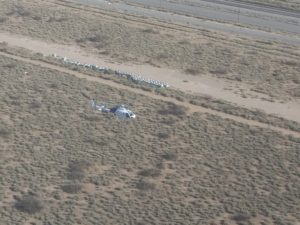 The dynamics of policing the US-Mexico border is daunting. Effective enforcement efforts are affected by manpower shortages, multi-jurisdictional issues, and remote and inhospitable terrain. These factors all come together to make police air and ground assets coordination a necessity not only for effective enforcement operations, but also officer safety.

Our nearly 2,000-mile border with Mexico contains a diversity of terrains, waterways and no-man’s lands, compounded by summer temperatures that easily and consistently hit triple digits and evening temperatures that dip below freezing. These all have an impact on the types of challenges ground officers face requiring air support, especially in Texas where 60 percent of the border is located.

Teaming up to provide air coverage of the 1,200-mile border between Texas and Mexico are assets from the Texas Department of Public Safety and U.S. Customs and Border Protection Air and Marine Operations (CBP AMO).

Both agencies typically work synergistically with each other, but are also frequently called upon to support U.S. Border Patrol, police and sheriff units on the ground intercepting illegal aliens and human and drug smugglers, or conducting rescue missions of stranded migrants experiencing medical emergencies. The latter of which occurs more frequently than people realize.

“Here in El Paso, we have an excellent relationship with all of our partnering agencies, but in particular, the aviation crews,” said Gayle. “We address current or perceived threats and share responsibilities as appropriate. This has really paid huge dividends when it comes to safety of operations for all those involved, as well as strengthens relationships between individuals and at the agency level.” 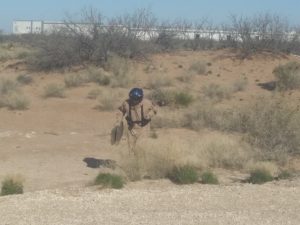 Immediate deployment of assets is key.

Operation Drawbridge is the cornerstone relationship between Texas DPS, the U.S. Border Patrol and border sheriffs. Air operations have yielded significant results, validating the need for air/ground coordination. In fiscal year 2017, Texas DPS conducted 3,832 hours of flight time in support of USBP. During this time, the Texas DPS Aviation Unit contributed to the apprehension of 2,270 illegal aliens.

During an incident on the ground, the primary air branch responding will dispatch aircraft suitable for the mission and simultaneously send an agent with equipment to provide situational awareness to participating offices. This usually involves near real-time video from the aircraft’s perspective and communication. This additional information is shared with the decision makers at the event and greatly enhances their decision-making capability as they can now command and coordinate a response based on an aerial view that could include infra-red and thermal imaging.

Commander Ryan Urrutia with the El Paso County Sheriff’s Office says his agency requests air support from the local Texas DPS air assets by contacting the DPS Joint Operations and Intelligence Center. He adds that the protocol is to request Texas DPS air support first since they are partners with the El Paso JOIC and the air asset is in place to support local law enforcement on a regular basis. If necessary, U.S. Customs and Border Protection Air and Marine assets are also available since this is a major DHS sector.

“The request (for air support) is on a case-by-case basis. Many times the DPS air asset is already patrolling and will self-dispatch when they hear a call for service that may require air support,” Urrutia says.

Successful police air and ground assets coordination is predicated on effective communications between the assets and dispatch. Urrutia says communication and coordination is handled via monthly JOIC meetings assuring each local agency has a point of contact so requests are handled in a timely manner. Emergency requests are handled directly from the sheriff’s office dispatch to the area DPS dispatch.

Gayle agrees that communication is key to operational success. He finds that a major challenge they see in interagency operations involves challenges with hardware and technology.

“Differences in frequencies and encryption between agencies and offices are problematic at times, especially when there is short notice to plan with participating agencies,” says Gayle. “That and we operate in very remote locations that limit our or our law enforcement partners’ abilities to communicate.”

Gayle says his unit conducts regular training with the El Paso Police Department. Ways to ameliorate communications issues is sharing of radios, as well as being able to be patched together through the Border Patrol dispatch center.

Another issue Gayle sees is an identity crisis in that some agencies are not fully aware of AMO’s existence and capabilities.

“Ask people who AMO is and you will get a puzzled look,” he says. “Even worse, ask them about our mission or capabilities.  As an agency, we may be overlooked when it comes to participation and planning because even our law enforcement partners don’t understand who we are and what we can bring to the table to help them do their jobs safer and more efficiently.

A lack of knowledge of AMO’s mission could impact the effectiveness of police air and ground assets coordination, which enables strategies like “leap frogging.” On a recent mission PoliceOne flew with Gayle, this strategy was observed first hand.

An unknown number of illegal border crossers were suspected of entering the U.S. near the Santa Teresa Port of Entry in New Mexico. While USBP was in pursuit on the ground utilizing ATVs and mounted patrols, Gayle and another AMO helicopter flew forward a quarter to half mile ahead to scour the desert floor for the suspect(s) and report their findings to ground units. The ground units would then move ahead of the helicopters, and so on. This strategy is played out daily along the border, often with great success.

The following steps ensure the most effective coordination of air/ground units during both police pursuits and other law enforcement operations at the southwest border: