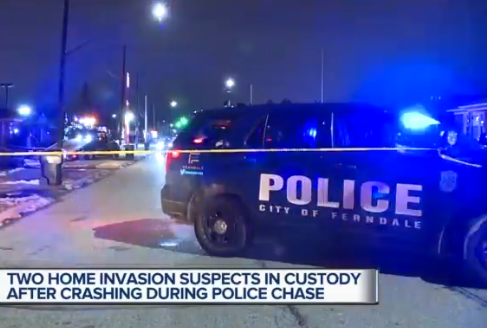 According to police, it started in Ferndale when a resident heard a noise coming from the first floor of their home. He investigated and found an intruder standing his his living room.

Police say the suspect ran out the back door and got into a car that took off. The homeowner then called police.

While investigating, police heard from Madison Heights who said the crime was similar to ones reported in their town. Madison Heights police gave a vehicle description and suspect description, and found an address in Hazel Park one of the suspects used.

Police say officers went to the home, and while waiting, the suspect’s vehicle, a a 2014 Ford Fusion, drove by. A short chase ensued into Detroit.

During the chase, the suspect’s vehicle struck a utility pole and crashed into several houses before landing upside down in the front yard of a home pinning both suspects inside.

Police were able to help both injured men out, and fire crews responded as well. One of the suspects was unconscious and unresponsive, and both were taken to the hospital for treatment. Their conditions are unknown.

Inside the Fusion, police found items stolen from the home earlier. Both suspects are 27 years old, one from Detroit and one with addresses in Hazel Park and St. Clair Shores.