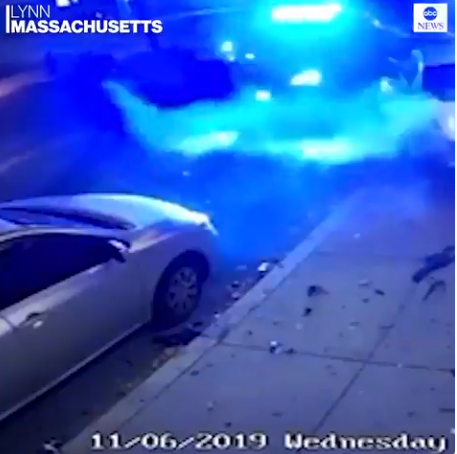 A brief car chase through Lynn Wednesday night that started with a traffic-stop-gone-wrong ended with two arrests, one serious injury, and a mangled storefront.

Police stopped a car for traffic offenses around 7 p.m. on Joyce Street, Lynn police spokesman Lt. Michael Kmiec said in an email. The woman driving the vehicle allegedly backed it up during the stop, almost hit the officers, and then hit their cruiser with her car and drove away.

Officers reportedly followed the car a “short distance” until it crashed into another vehicle at Essex and Chatham streets. WHDH reported one of the cars then careened into the Merengue Market, damaging the store.

A passenger in the offending vehicle reportedly ran from the scene and was arrested. The driver was also arrested.

Kmiec identified the driver as Khadijra Boyd, 28, and the passenger as Juan Potter, 29, both of Lynn.

A firearm and ammunition were also recovered at the scene, according to police.

Boyd and Potter were expected to be arraigned Thursday on a slew of charges, including failure to stop for police and carrying a firearm without a license.