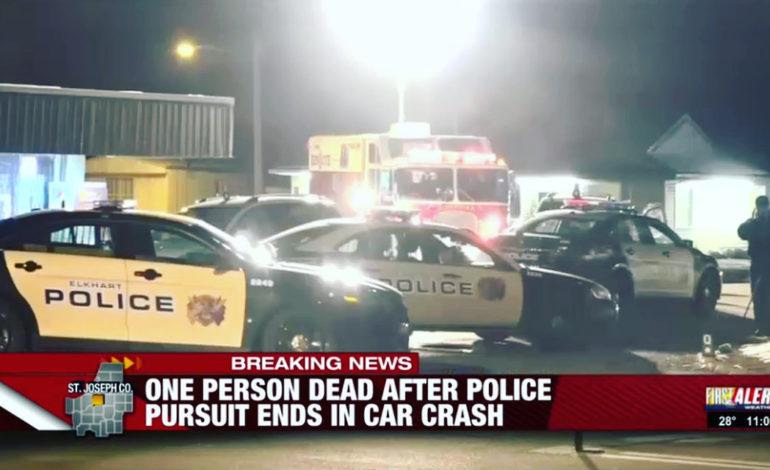 MISHAWAKA, Ind. (WNDU) – One person died after a crash in Mishawaka Friday night involving a vehicle fleeing from police.

The suspected driver of the fleeing vehicle that caused the crash ran away from the scene, and police used K-9 units in an attempt to track the suspect driver but were unsuccessful.

A reportedly stolen white Jeep disregarded several stoplights before slamming into the driver’s side of a green Toyota Camry at the intersection of McKinley and Byrkit avenues, Indiana State Police spokesman Sgt. Ted Bohner said. The driver of the Toyota was pronounced dead at the scene.

A passenger in the Toyota was also transported to the hospital with serious injuries.

Police continue to search for the driver of the Jeep, described as a black man in a dark jacket or sweatshirt and gray sweatpants.

Four other people reportedly were in the Jeep. Three were taken to the hospital and the fourth was detained for questioning.

The inciting incident happened around 7:24 p.m., when an ISP trooper tried to stop the Jeep as it was going approximately 99 mph on the U.S. 20 Bypass near the Elkhart-St. Joseph county line.

The trooper gave chase and eventually discovered the Jeep had been reported stolen. The Jeep got off the Bypass at State Road 19, then headed north into Elkhart before turning west on Old U.S. 20.

Police reportedly held back at Home Street to let traffic clear, but the Jeep continued, causing the crash at Byrkit.

Anyone with information on the Jeep driver is encouraged to contact Indiana State Police at 574-546-4900.