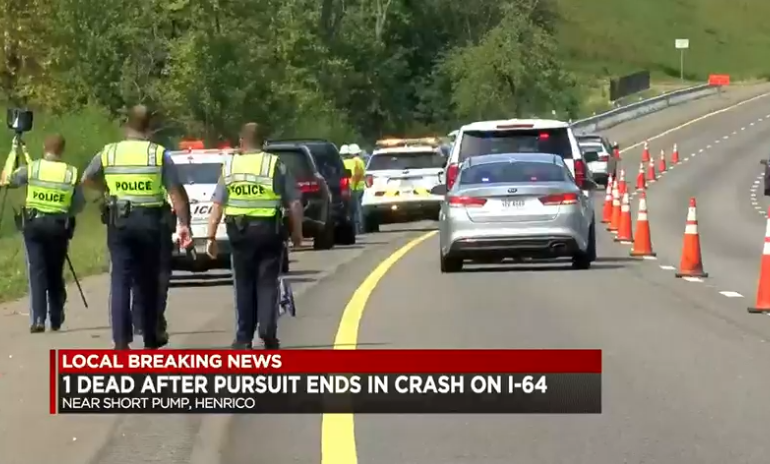 HENRICO, Va. (WWBT) – One person has died following a police chase and crash on I-64 involving a bank robbery suspect.

Chesterfield police were called for a robbery at Wells Fargo on Amberdale Drive at 9:51 a.m. A man entered the bank, passed a note to the clerk demanding money and displayed a handgun. After receiving money, he fled the bank. No one was injured during the robbery.

Officers identified a suspect vehicle and a pursuit began which continued into Richmond before officers lost sight of the vehicle.

A Virginia State Police trooper located the vehicle, a black Nissan XTerra, on the Downtown Expressway in Richmond and the pursuit continued onto I-64.

The vehicle crashed and then overturned several times in the median.

A man was ejected from the vehicle. Henrico police administered CPR but the man died at the scene. Another man in the vehicle was transported to the hospital with serious injuries.

Chesterfield police said the man who died was the same man who entered the bank. The second suspect was identified as Dorell Taylor Jr, 27, of Richmond. Warrants have been obtained against Taylor on charges of conspiracy to commit a felony, robbery and use of a firearm in commission of a felony.

Taylor remains in police custody in the hospital.

No law enforcement officers were injured in this incident. The crash closed I-64 westbound for more than an hour. The bank was also closed.

Check out the link below  for video footage from the scene of the crime.